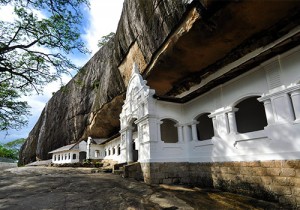 Sri Lanka is steeped in heritage. With a history that dates back over 2,000 years, Sri Lanka is home to some of the best preserved Asian monuments and showcases no fewer than 8 UNESCO World Heritage sites, all remarkably preserved to surpass more well-known world class attractions. 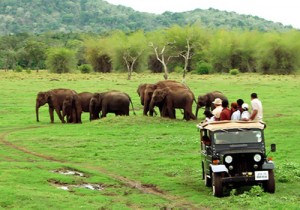 There are so many thrilling wildlife safaris you could choose from, and you’ll find that most are suitable for families. You’ll see a lot of elephants and birds and experience our unique ever smiling mix of people and cultures. You’ll simply have a great time here!  You’re out there to enjoy, get close to and photograph Sri Lankan wildlife and birds in their natural environment. On your Sri Lankan safari you’ll also tour through some outstanding scenery. 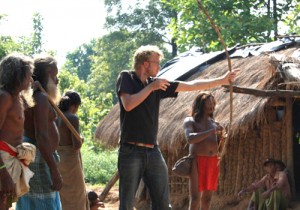 There is a small, remote village far in the jungles of Dambana where an ancient indigenous race of hunter gathers still remain determined that their way of life will continue into future generations as the self appointed keepers of this island nations jungles. They are essentially hunter gatherer forest dwellers without much change in their life style from Stone Age to modern times. The language used by them is an ancient dialect of Sinhala, staple diet being venison, Veddha’s are allowed to hunt legally to sustain themselves within certain areas, are also expert fisherman. Veddha’s also collect bee’s honey and exchange it with the locals for axe blades and cloth.

The production of tea really took off during the days of British rule in Sri Lanka, when large tracts of land were converted for mass commercial tea production. If you’re a tea lover, don’t miss visiting these places where you’ll find the best of the world renowned Sri Lanka tea plantations and tea. You can even stay in a tea estate and tour the tea factories. 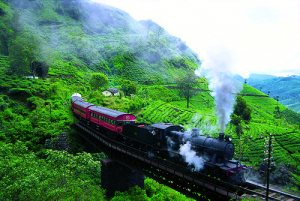 The central hills when the train speeds up through thick jungle, hugging the curves of the mountainside, by vast stretches of emerald green paddy and tea plantations marching down on both sides, Keep your eyes peeled for waterfalls near and far, which increase as the trees thin and the view turns to deep valleys and peaks. 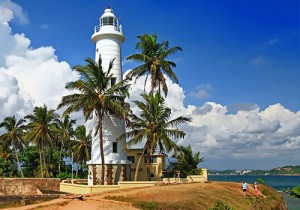 Forts were erected by the medieval nations to guard against foreign invasions and the advent of the mightiest weapon of that time the cannon, wide ramparts, bastions and some of them even have an inbuilt harbour with moats and drawbridges. Dutch built forts were masterpieces during the colonial era. Lighthouse were deemed necessary to warn off ships of dangerous waters or tropical coral reef during the time when the ship were made of wood and sailed around the world using trade winds. Sri Lankan lighthouses were built and maintained by the imperial lighthouse service. 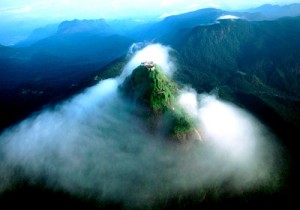 Known as Sri Pada (Sacred Footprint), left by the Lord Buddha on a visit to this paradise island is located in a beautiful and fascinating area of the southern Hill Country, this lofty peak has sparked the imagination for centuries. It is variously known as Adam’s Peak, the place where Adam first set foot on earth after being cast out of heaven, whatever legend you care to believe this place has been a pilgrimage centre since the 01st century BC. 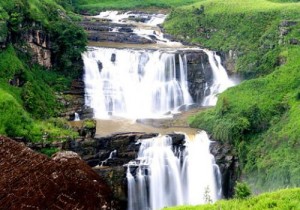 Sri Lanka s blessed with waterfalls of exquisite beauty. Numbering more than hundred and   many of them are virtually unknown, hidden away in forest or approached by steps and remote tea plantation tracks. In fact for it’s size Sri Lanka has recorded waterfalls than another country. Sri Lanka’s numerous revers, fed by two half – yearly monsoons, with topography of high and steeply scarped peneplains, and rever beds of hard erosion-resistant metamorphic rock, all provide ideal ingredient for the formation of waterfalls.

The glittering shoreline of wide tropical beaches proffer easy access, from one end of the island to the other, you can be sure to find these cool waters and white sands wherever you go in the island. Snorkelers and divers love to explore its gin-clear waters. In addition to its white sand beaches, the island is known for its coral gardens, and yet unexplored beaches in the deep down south & east.

Sri Lanka offers a variety of different golfing experiences, with the rolling hills of the Victoria Golf club in Kandy, Royal Colombo Golf Club – the 2nd oldest golf club in Asia and the unique experience of a golf course and city intertwined. Enjoy a part golf, part sightseeing holiday and you will surely want to come back for more.